A great time was had by a lively and large group of all ages at the Shrove Tuesday Pancake Supper. Thanks to all who donated food and to the many cooks who prepared the meal, as well as to the folks who cleaned up the mess. We’ve had our Fat Tuesday extravaganza–now it is time for a Holy Lent!

We had a wonderful Messy Church Lent season here at St. John’s Church, with activities for all ages. Each week we added to our Lenten gardens, which later became Easter gardens with the addition of wheatgrass seeds, butterflies, and flowers. And, we made lots of beautiful butterflies to display on Easter morning. Here’s a little video showing our works in progress throughout the season.

Lent and Easter from Kelli Ann Wilson on Vimeo.

The Bishop of the Episcopal Church of New Hampshire, the Rt Rev A. Robert Hirschfeld, visited St John’s Church yesterday. It was a glorious day–Kelli and Julia were confirmed, the Bishop preached an inspiring sermon on the implications of transfiguration for this faith community, and we gathered at the Table and gave thanks for the risen Christ’s presence among us. Thank you, Bishop +Rob, for helping us see God at work in our midst and in our neighborhood!
Congratulations, Kelli and Julia, on your confirmations! We are so happy for you and honored to walk with you on your faith journeys!

Candlemas: Celebrating the Light of the World
by Kelli Ann Wilson

Candlemas is the common name for a Christian holy day that commemorates the Presentation of Jesus at the Temple and the purification of the Virgin Mary.[i]  At the time of Jesus’ birth, Jewish tradition dictated that on the fortieth day after giving birth a woman would go to the temple to present her child to the Lord.[ii] Forty days from Christmas day brings us to February 2nd, the day on which Christians celebrate the occasion of the Holy Family’s visit to the temple in Jerusalem for the presentation of the Christ Child.[iii]

There is no consensus among historians regarding the exact origins of this feast day, though there are a few theories. It’s possible that the Roman Catholic Church instituted the celebration of Candlemas sometime between the fourth and sixth centuries; others believe that Candlemas is the result of the Church’s efforts to Christianize various pagan celebrations that took place during the month of February.[iv] Regardless of its murky origins, one can imagine why the first public presentation of Jesus, who is called The Light of the World, might come to be associated with the lighting of candles.[v]

In earlier times, Candlemas was seen as the official end of the Christmas season, which lasted much longer than it does today. Even as recently as the late 19th Century it was common not to remove the Christmas greenery until Candlemas, at which time it was traditionally burned in the family fireplace.[vi]

Other Candlemas traditions naturally arose over the centuries, perhaps the most well-known being the “blessing of the candles.”  We can take a closer look at this tradition by becoming acquainted with a branch from my very own family tree.  My mother’s family traces its roots to the French colony of Acadie, located in Atlantic Canada and comprising such places as New Brunswick, Prince Edward Island, and Nova Scotia.[vii]  In fact, my maternal line (my mother’s mother’s mother…etc.) recedes back through time to a woman named Catherine LeJeune who lived in Port Royal, Acadie (now Annapolis, Nova Scotia) in the mid-17th Century.[viii]

Like her fellow Acadiens, my ancestor Catherine LeJeune was a Roman Catholic from France and she would, no doubt, have been quite familiar with Candlemas.  Historical documents show that the annual blessing of the candles in Acadie, during which time families would bring their year’s supply of candles to be blessed by their parish priest, goes back several hundred years.  For example, in 1693 Joseph Robineau de Villebon, a commanding officer in the Acadien colony, delivered sixty candles to Beaubassin (in Nova Scotia) on behalf of the inhabits of the parish to be blessed by their priest on Candlemas morning.[ix]

In Acadie, the blessed candles were used for many purposes throughout the year—to protect the house, to use when the priest came to a home to bring communion to the sick, or to burn while the family kept vigil over the body of a loved one who had died.  Some midwives would light a blessed candle during a difficult birth, and Acadien fishermen sometimes kept a blessed candle on their boat to light during stormy weather.[x]  The blessing of the candles was preserved in Acadien parishes until very recently.[xi]

Another Acadien tradition that took place on Candlemas was the door-to-door collection of food to be used for a community meal later in the day. Anyone with a large enough house could host the party.  This activity was not only entertaining for all involved, but it was also an act of charity—any food that was left over after the party was given to the poor.  In some villages the collection of food was done almost exclusively for the purpose of providing for the sick, the widows, and the poor.[xii]

Below is a little video of St. John’s parishioners making hand-rolled beeswax candles for Candlemas—a great activity for all ages. We invite you to celebrate Candlemas with your family on February 2nd—perhaps by making a donation to the Fall Mountain Food Shelf, in the spirit of the Acadien Candlemas collections of long ago.

Chili was the main entree at today’s community meal, following the service. The food was delicious and the fellowship was warm. Today was also Clergy Appreciation Day, and St. John’s presented our rector Susan de Puy Kershaw with a small gift to thank her for her many years of hard work and dedication to our parish. The afternoon ended with a special program for children using the Holy Moly video series. Participants made a special project to accompany the lesson about Abraham and Sarah. The next potluck is Sunday, Nov 1st — All Saints’ Day! Here are a few photos from the event. 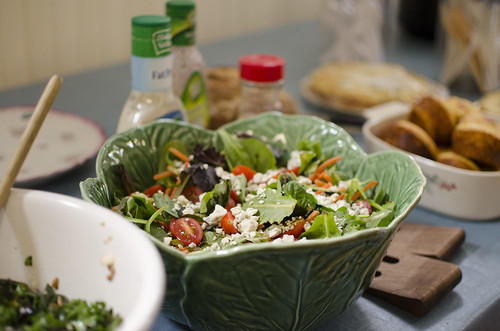 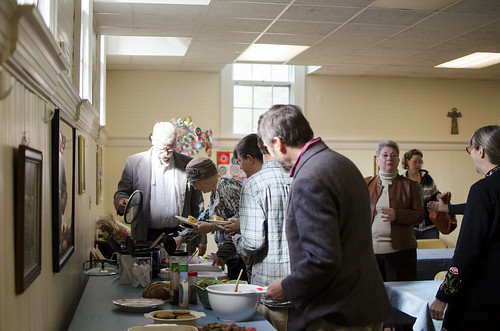 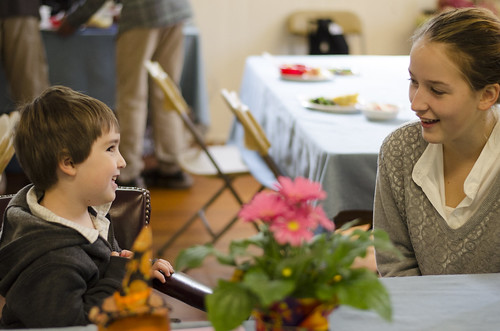 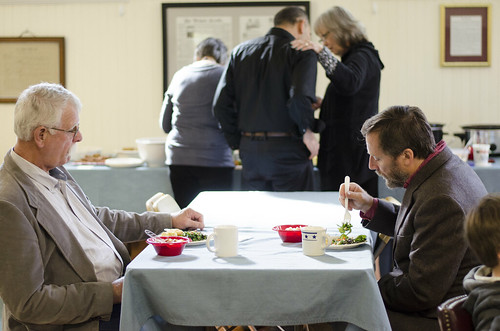 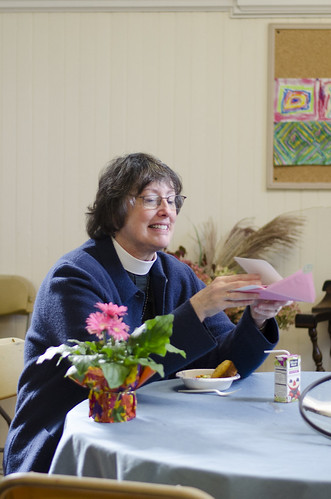 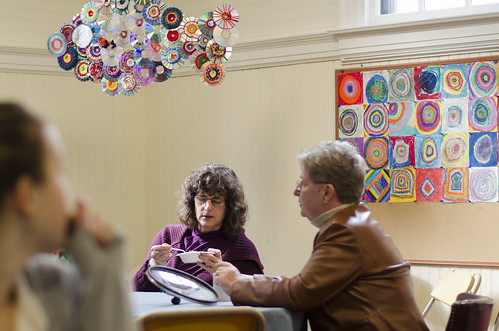 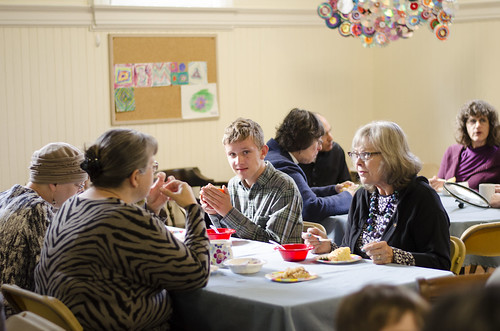 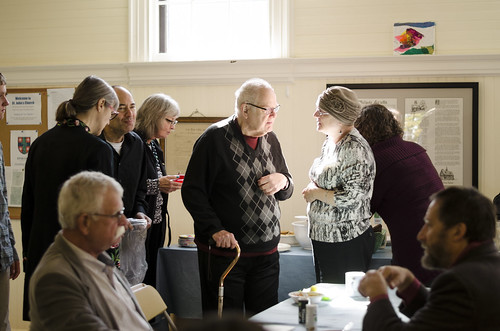 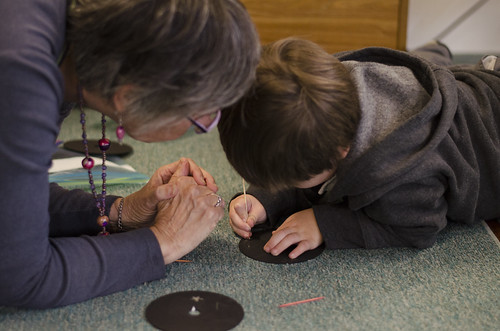 This past Sunday we had a fun fellowship event at St. John’s in honor of the start of Red Sox baseball season. There were hotdogs with all the fixings, delicious sides, and ice cream for dessert. We even entertained a few Yankees fans (it’s the Christian thing to do, after all)! Thanks to all who brought food and/or came to share it with us! 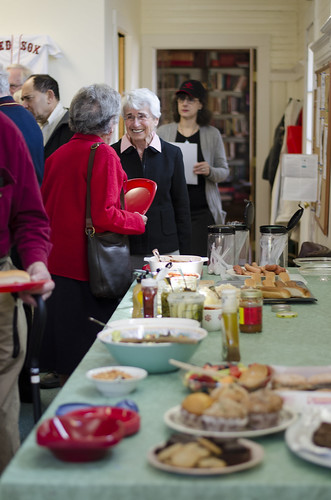 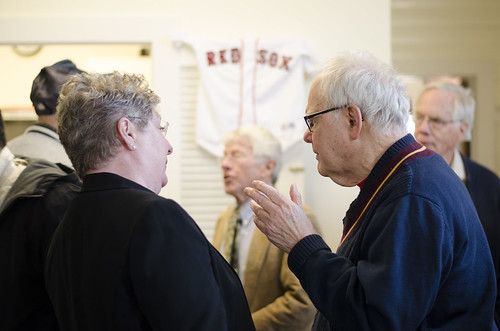 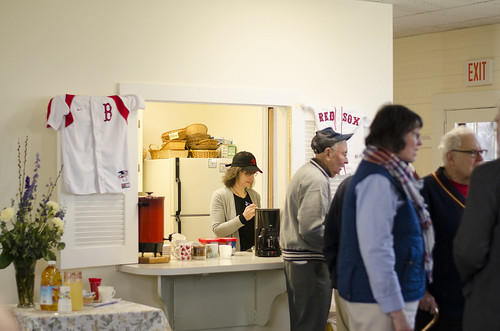 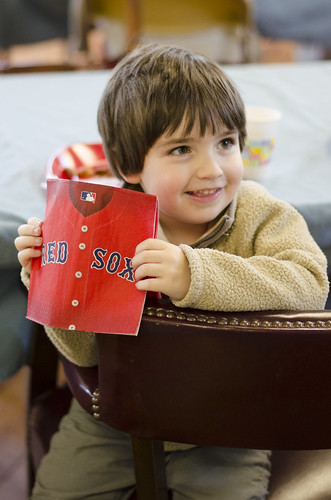 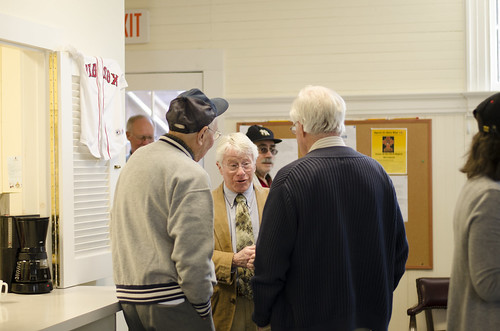 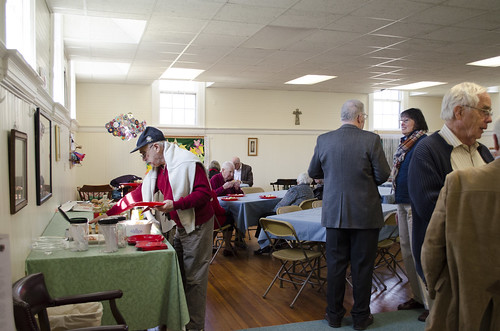 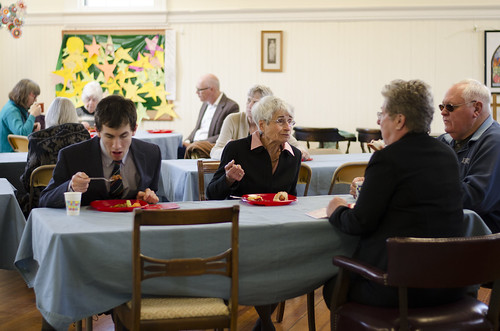 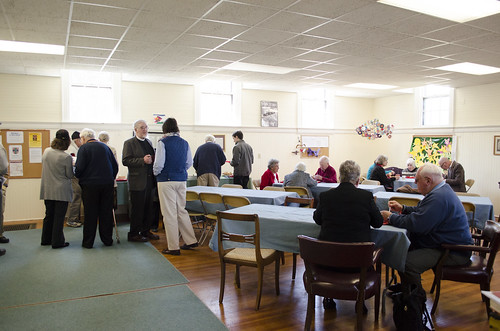